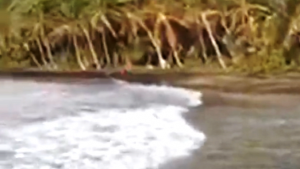 Information coming to hand is that four persons, three children and an adult, from the coastal Eastern suburb of Prospect in St. Vincent & the Grenadines, are now reported as missing at sea.

The individuals went missing on Sunday 3rd June 2018, at a seldom visited beach in the area, known as Breakers.

Residents of the area say that this particular beach, though it can at times be shallow even yards away from shore, is known to possess unpredictable rip currents and undertows. Over the years warning have been issued about visiting the beach which is located off the beaten path in a secluded area of Prospect, in close proximity to Shrewsbury House.

On Monday morning the SVG Coast Guard Service was deployed for search and rescue in the area. Thus far no additional information has been received as to the whereabouts of the missing four.

Ironically, today marks the one year anniversary of another national tragedy, when six persons were lost at sea while travelling by small motor vessel between the Grenadine islands of Canouan and Mustique on the evening of Sunday 4th June 2017.