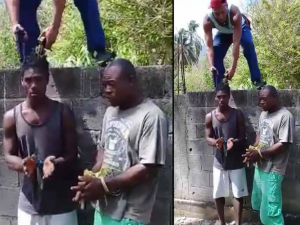 A source close to Mikey Live has confirmed that Marlon Garraway, the man who said he was kidnapped by Venezuelans for two months, is currently in Carriacou, living with the man he accused on tape of getting him into trouble with the Venezuelans.

Since his return of Friday, many have been questioning Marlon’s account of the alleged kidnapping. Several hours after his return, he was video tapped drinking alcohol and having fun with his friends.

He has since left his family in mainland Grenada and is currently in Carriacou.

To date, Marlon has not made himself available for interviews, nor made a public appearance to thank the people who sent money to pay a ransom of Us $30,000.00, when they believed he was being kidnapped.

Several members of his family have since taken to social media expressing their disgust in his behavior and questioning the authenticity of his abduction story.

Mikey Live understands that police may call him in for questioning soon.