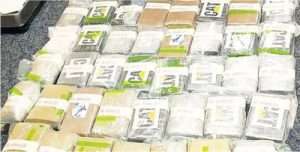 Trinidad:  Two cargo handlers, two security guards and a passenger appeared in court yesterday charged for what police have described as the single largest cocaine bust at Piarco Airport.

The five accused were scheduled to appear before an Arima Magistrate yesterday charged with possession of almost 39 kilogrammes of cocaine, which carries an estimated street value of $35m, a police statement said.

The suspects, Marlon Thomas, 45, a labourer, of San Juan, along with Krystel Birot, 24 of Trincity and Maurice Hinds, 27, of Arouca, both employees of cargo firm, Swissport, as well as Kyle Jones, 23, of Sangre Grande and K’dere Lee Gomez, 27, of Carapo, both employed with Intercept Security, were charged after two suitcases of cocaine were seized on Sunday following investigations by the Organised Crime and Intelligence Unit.

The suitcases had been loaded on a Caribbean Airlines flight destined for New York.