Mikey Live
HomeRecentMissing Teen: “I am Not Missing, My Mother Is One Wicked Woman”
FeaturedRecent

Missing Teen: “I am Not Missing, My Mother Is One Wicked Woman”

St. George, Grenada, May. 4, 2018: A 16-year-old girl who police have reported missing on Friday, says she is not missing but was put out by her mother.

According to police, Ivorna left her home on Thursday 26th April, 2018 and has failed to return since.

Moments after the information was posted on our Facebook page, Ivorna responded, saying she was not missing, but was thrown out by her own mother. 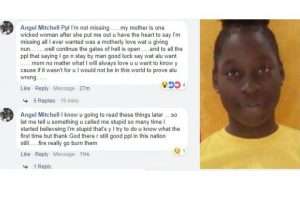 One family member contacted our news desk relating stories of how badly the mother treats Ivorna, who has in recent times attempted suicide.

Here is the story being told by Ivorna’s mother, on GBN.

Facebook
Twitter
Pinterest
WhatsApp
Previous articleMikeyLive: Religious Leader Sentenced To 39 Years For Sexually Assaulting His 3 Daughters – Missing Teen: “I am Not Missing, My Mother Is One Wicked Woman” – Seems The Hurricane Season Is Attempting An Early Start This Year – Another Biker Injured In Crash – 32 Year-Old Fisherman Sentenced To 17 Years
Next articleTwo Infants Burn To Death In Early Morning Fire