Facebook is now testing its “downvote” button in New Zealand, following a similar trial which took place in the US in February. 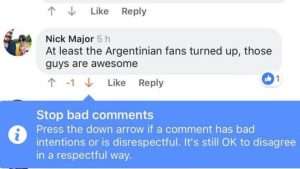 The tool, which appears on some public posts, will let people hide comments and provide feedback about them.

The BBC understands that there are no immediate plans to roll it out across the social network.

Discussion site Reddit has a successful “downvote” option that reduces the visibility of unpopular posts.

Facebook said the button was being tested to see whether it enabled “better public discussions”.

“Our hope is that this feature will make it easier for us to create such spaces, by ranking the comments that readers believe deserve to rank highest, rather than the comments that get the strongest emotional reaction,” said a spokesman.

The tech giant added that the button is not a “dislike” button.

While the new trial is geographically taking place in New Zealand, some Facebook users in Australia have also reported seeing it.

CNet said that colleagues in its Sydney-based office could see the button “on certain public pages that were created in Australia, and only on Facebook’s mobile app”.

Reddit co-founder Alexis Ohanian tweeted that he was “flattered” by the “downvote” tool.

Facebook is holding its annual developer conference this week in San Francisco.

The “downvote” tool should be viewed in light of the firm’s efforts to change the way people consume news on Facebook said Jack Kent, analyst at IHS Markit.

“Given the current debate about Facebook’s role in public online discourse and news, it makes sense that the platform is trialling different ways for users to interact with content in a public setting,” he said.

However, the firm needs to retain a balance between allowing positive and negative feedback, and maintaining debate, he added.

“While the company has been quite vocal in its opposition to launching a ‘dislike’ feature, it did expand its options from simply liking posts and content to a range of emojis in 2016,” Mr Kent said.