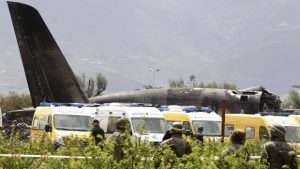 (BBC) – At least 257 people have died after a military plane crashed in northern Algeria, the defence ministry says.

The incident happened shortly after the aircraft took off from Boufarik military airport near the capital Algiers in the morning.

Most of the dead are army personnel and their families, according to the defence ministry. Ten crew members were also killed.

It is not yet clear what caused the crash.

The army’s chief of staff has ordered an investigation into the crash and will visit the scene.

It is the deadliest plane crash since July 2014, when all 298 people on board Malaysian Airlines flight MH17 died when it was shot down over eastern Ukraine.

It is also the second-deadliest plane crash since 2003.

The authorities are working to identify remains of those killed. Footage from the scene shows smoke coming off wreckage in a field.

The plane, an Ilyushin Il-76, was travelling to Bechar in the south-west of the country.

Among the dead are said to be 26 members of the Polisario Front, seeking independence from Morocco for Western Sahara and supported by Algeria.

This is not the first major plane disaster in Algeria

The deadliest crashes of the last 15 years

17 July 2014: Malaysia Airlines flight MH17 crashes near Grabove in eastern Ukraine, killing all 298 people on board, 193 of them Dutch. Pro-Russian rebels are widely accused of shooting the plane down using a surface-to-air missile – they deny responsibility

19 February 2003: An Iranian military transport aircraft carrying 276 people crashes in the south of the country, killing all on board

1 June 2009: An Air France Airbus 330 travelling from Rio de Janeiro to Paris crashes into the Atlantic with 228 people on board. Search teams later recover some 50 bodies

31 October 2015: An Airbus A321, operated by Russian airline Kogalymavia, crashes over central Sinai some 22 minutes after taking off from Sharm el-Sheikh, killing all 224 people on board. The Islamic State group’s local affiliate later says it brought down the plane in response to Russian intervention in Syria

7 July 2007: A TAM Airlines jet crashes on landing at Congonhas airport in Sao Paulo, in Brazil’s worst-ever air disaster. A total of 199 people are killed – all 186 on board and 13 on the ground

Swearing In Of Grenada’s Opposition Leader