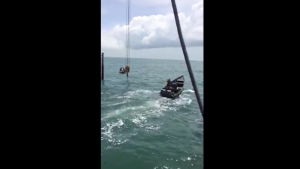 The three fishermen, who were taken from the territorial waters of Trinidad and Tobago by members of Venezuela’s Guardia Nacional last week, were expected to return to their families on Monday.

The three men, Awardnath Hajaire, 52, his son Nicholas, 26, and their friend Shami Seepersad, 36, went fishing aboard a pirogue off Cedros last Thursday.

A video which has been circulating on social media shows the fishermen by a Trinmar oilrig, being pursued by the Venezuelan officials.

They were then forced out of their pirogue into another vessel by Spanish speaking men, who were armed. This vessel then sped away.

A subsequent release from the Ministry of National Security indicated that the Venezuelan authorities had told Trinidad officials that the detained fishermen were allegedly spotted fishing in Venezuelan waters.

It was said the Venezuelan vessel chased them into local waters where they were arrested.

However, this act has been questioned by many senior officials who stated that the Venezuelan authorities had no legal rights in the territorial waters of Trinidad and Tobago.

It was said that the three men had all been charged for their alleged offence, and a fine was ordered and paid.

Citizens are calling for more to be done to protect the nation’s borders as hundreds of Venezuelan nationals continue to enter the country in an attempt to flee economic hardships in Venezuela.

Recently, police detained a number of Venezuelan nationals who were said to be in this country illegally.