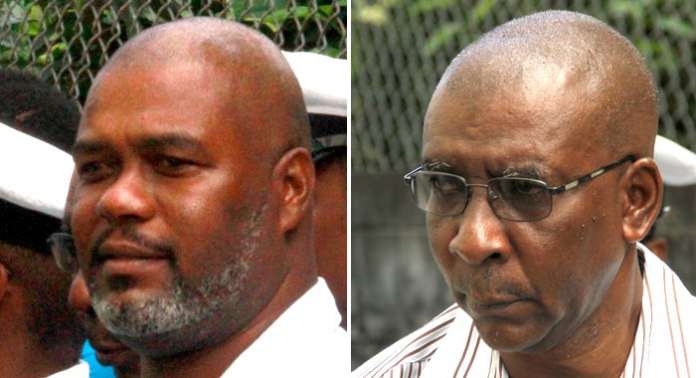 The two men charged in relation to the alleged theft of money intended for Social Welfare recipients were on Monday denied bail as the number of charges against them reaches 39.

Learie Johnson, 62, of Lowmans Windward and Derville Thomas, a 42-year-old former police officer of Bridgetown, Biabou, were denied bail for a second consecutive week at the Serious Offences Court.

Chief Magistrate Rechanne Browne-Matthias upheld an application by Senior Prosecutor Adolphus Delplesche that the men be denied bail to allow investigators to continue their probe.

The men were denied bail amidst forceful submissions by their lawyers, Grant Connell and Israel Bruce.

On Monday, they were jointly charged that on Feb. 2, 2018 in Owia, they stole EC$750, the property of the government of St. Vincent and the Grenadines.

The money is said to have been intended for persons who receive “Poor Relief”, as the monthly social welfare payouts to the nation’s poor and aged is commonly called.

The men are accused of defrauding the government by stealing “Poor Relief” money.

All the alleged crimes reportedly took place in Owia on Feb. 2.

The money allegedly stolen was reportedly disbursed by the state in the name of deceased persons who were yet to be removed from the Social Welfare register.

The men were not required to plead to the indictable charges.

In his submission against bail, Delplesche told the court that as he said one week earlier, investigations are continuing.

He said that while the probe has borne fruit — as evidenced by the additional charges — the lead investigator, Detective Sergeant Malcolm Alexander, said he needs more time.

Delplesche said that the crown was asking that the men be denied bail for a few more days.

But Connell told the court that that if the police had conducted their investigations properly, all the fruits that Delplesche spoke of would have come in one basket.

He said it would fly in the face of justice and would be unethical to hold back charges so that the Crown can continue to oppose bail by bringing new ones weekly.

Connell said that the prosecution had placed the cart before the horse and was relying on the court to allow them to abuse his clients’ constitutional rights.

Bruce, in his submission, said that the new charges proffered against the men allegedly took place on the same day, Feb. 2, 2018, as the ones brought against them one week earlier.

He said that it is crystal clear to even the blind that the information used to substantiate the new charges is the same information from which the first set arose.

Bruce said his clients should not languish in prison because the investigation wants to be piecemeal.

But the prosecutor said it is unfounded to say the investigator is holding back charges, adding that the nature of the offence is such that the police officer has to interview people, review the material then proffer charges, accordingly.

Delplesche said that justice was not lopsided, noting that while the accused men have constitutional rights, so does the Crown.

The chief magistrate denied the men bail and set a further bail review for next week Monday, Feb. 26.

The men’s alleged crimes are said to have been unearthed when a police officer at Owia noticed that they were reportedly making Poor Relief payments without the requisite document.

The Crown is alleging that the men made and used false instruments in the names of deceased persons, some of which were reportedly yet to be removed from the Social Welfare register.