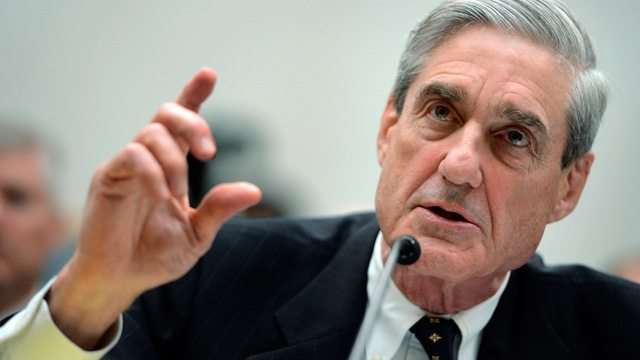 The indictment said the Internet Research Agency, a Russian organisation, and the 13 Russian individuals began interfering in US political processes, including the 2016 presidential election, as early as 2014.

The Russian individuals allegedly posed as US citizens, stole identities and created fake social media accounts to communicate with “unwitting” individuals associated with the Trump campaign, the indictment said.

In a February 10, 2016, planning memo, the Russians were instructed to “use any opportunity to criticise Hillary and the rest (except Sanders and Trump – we support them).”

The operations also denigrated candidates including Ted Cruz and Marco Rubio, Trump’s rivals in the 2016 Republican primary, the indictment said.

The group bought advertisements on US social media and created numerous Twitter accounts designed to appear as if they were US groups or people. One fake account, @TEN_GOP account, attracted more than 100,000 online followers.

The Russians tracked the metrics of their effort in reports and budgeted for their efforts. At one point in the indictment, a price tag is put on the effort: $US1.25 million ($1.58 million) in one month.

Some traveled to the US to gather intelligence for the surreptitious campaign, according to the indictment. They used stolen US identities, including fake driver’s licenses, and contacted news media outlets to promote their activities.

In September 2016, the group ordered one worker to “intensify criticising Hillary Clinton” after a review found insufficient anti-Clinton activity.

One of those charged was Yevgeniy Prigozhin, a wealthy Russian businessman and caterer who has been publicly identified as a close associate of Russian President Vladimir Putin. He allegedly ran a company that financed the Internet Research Agency.

The indictment points to a broader conspiracy, saying the grand jury has heard about other people with whom the Russians allegedly conspired in their efforts.

Although the indictment alleges that the Russians contacted unwitting people in the Trump campaign, it does not allege that any high-level Trump campaign officials cooperated with the effort.

“There is no allegation that any American was a willing participant” in the Russian plan, Deputy Attorney General Rod J. Rosenstein said in a briefing.

The indictment also doesn’t make a determination on whether the meddling influenced the outcome of the election.

Nonetheless, the indictment seriously undermines Trump’s repeated contention that the entire Russia investigation is a “hoax” or “witch hunt”. It details specific activities the Russians took, initially focused mostly on creating general discord in the US, but eventually focused specifically on boosting Trump’s campaign.

Just after the indictment was released, Trump once again denied that there was any collusion between his campaign and Russia. 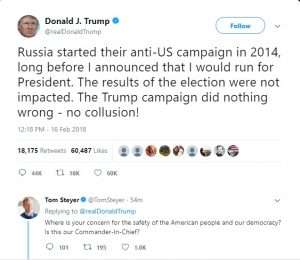 Though the Russians are unlikely to be immediately arrested, they are now wanted by the US government, which will make it hard for them to travel or do business internationally.

Mueller and his prosecutors haven’t concluded their investigation into whether President Donald Trump or any of his associates helped Russia interfere in the 2016 election, according to a person with knowledge of the probe.

The indictment of a St. Petersburg-based “troll farm” should be seen as a limited slice of a comprehensive investigation, the person said.

Mueller’s work is expected to continue for months and also includes examining potential obstruction of justice by Trump, said the person, who requested anonymity to discuss an investigation that is largely confidential.