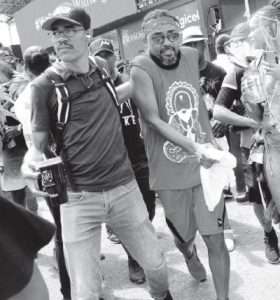 Those were the distressed words of Road March contender Machel Montano shortly after he came off a Tribe music truck at the Socadrome, Jean Pierre Complex, Port-of-Spain, suffering from some sort of illness yesterday.

Montano, visibly in pain and on the verge of a possible collapse, subsequently had to be hurried into a waiting chartered maxi taxi.

Seconds after the maxi drove off, Montano was transferred to an ambulance and attended to by medics. The ambulance sped away along Fitzblackman Drive, Woodbrook, and is believed to have taken Montano for medical treatment at a nearby private hospital.

Up to press time it was not confirmed what had happened to the soca king. But sources around Montano told the T&T Guardian that while on the truck at the Socadrome, Montano, who was belting out his road march tune “Soca Kingdom,” complained a few times that he was in some sort of discomfort. However, the people around him on the truck did not make any alarm or call for help for the singer. Twice Montano was seen attempting to place one of his feet on the truck’s railing and holding it and grimacing as though in pain.

At about 12.26 pm, as the truck drove off from the main stage and turned in an easterly direction to exit the complex, Montano was seen climbing down the truck. As security around him tried to hold him up, Montano began shouting: “How far, how far again.”

An eyewitness said he knew something was not right with Montano, noting as he was being escorted “his face looked as though he wanted to faint and like he could not hold up. He just wanted to get out.”

But sources close to Montano told the T&T Guardian there was “not anything to worry about.”

“We suspect that it could be a matter of exhaustion, but it is guaranteed that Machel will get the best treatment and once he is okay he will resume once more on the truck to continue with his live performance of his hit.”

At the Socadrome yesterday, Tribe’s Once Upon a Dream was the second big band to cross the stage at 11 am until 12.30 pm. The first big band Bliss went on stage at 9.56 am and Yuma crossed at 1 pm.

Paparazzi, with its presentation Nomadik Nation, was one of this year’s new bands to pass through the venue around 3.20 pm.

Socadrome spokesperson Danielle Jones-Hunte said nine bands registered to cross the venue yesterday, after they agreed to open up the stage to all bands wanting to cross. She said security was also beefed up given that there were reports of a Carnival threat.

There were also performances on the day from David Rudder, who had most on their feet and dancing with some of his old hits, including Amen, The Hammer and 2017 hit Welcome to Trinidad, Michael “Sugar Aloes” Osuna and Timothy “Baron” Watkins Jr.