PARKLAND, Fla. New York Times — A heavily armed young man barged into his former high school about an hour northwest of Miami on Wednesday, opening fire on terrified students and teachers and leaving a death toll of 17 that could rise even higher, the authorities said. 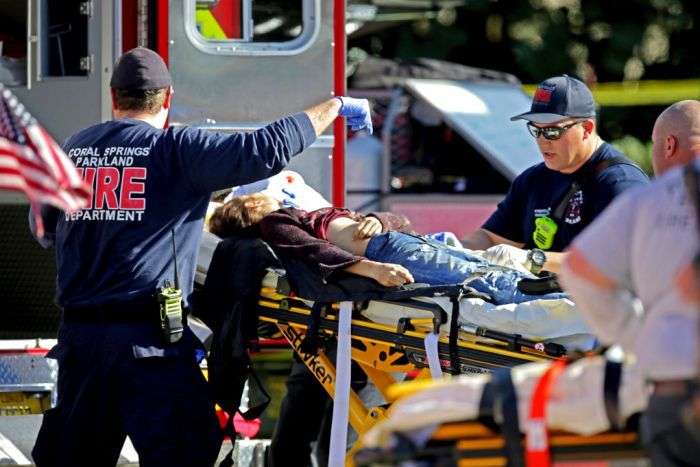 Students huddled in horror in their classrooms, with some of them training their cellphones on the carnage, capturing sprawled bodies, screams and gunfire that began with a few shots and then continued with more and more. The dead included students and adults, some of whom were shot outside the school and others inside the sprawling three-story building.

The gunman, armed with a semiautomatic AR-15 rifle, was identified as Nikolas Cruz, a 19-year-old who had been expelled from the school, the authorities said. He began his shooting rampage outside Marjory Stoneman Douglas High School in this suburban neighborhood shortly before dismissal time around 2:40 p.m. He then made his way inside and proceeded down hallways he knew well, firing at students and teachers who were scurrying for cover, the authorities said.

“Oh my God! Oh my God!” one student yelled over and over in one video circulating on social media, as more than 40 gunshots boomed in the background.

By the end of the rampage, Mr. Cruz had killed 12 people inside the school and three outside it, including someone standing on a street corner, Broward County Sheriff Scott Israel said. Two more victims died of their injuries in local hospitals. The aftermath at the school was an eerie shrine, with chairs upended, a computer screen shattered with bullet holes and floors stained with blood.

“This is catastrophic,” said Sheriff Israel, who has three children who graduated from the high school. “There really are no words.”

Mr. Cruz was arrested in Coral Springs, a neighboring city a couple of miles from the school, about an hour after fleeing the scene, the authorities said. He had slipped out of the building by mixing in with crowds of students. In addition to the rifle, Sheriff Israel said Mr. Cruz had “countless magazines.”

The gunman had clearly prepared for the attack, Senator Bill Nelson of Florida said in an interview after speaking to the F.B.I.

“The shooter wore a gas mask, had smoke grenades, and he set off the fire alarm so the kids would come out of the classrooms,” said Mr. Nelson, citing details he learned from the F.B.I. Several students said they found it strange to hear the alarm, because they had already had a fire drill earlier in the day.

Sheriff Israel said he did not know the gunman’s motive. He said a football coach was among the dead, and the son of a deputy sheriff among the injured. Twelve of the 17 dead had been identified by Wednesday night, he added, noting that not all of the students had backpacks or wallets on them.

Jim Gard, a math teacher at the school, said Mr. Cruz was in his class in 2016 and appeared to be a “quiet” student. But Mr. Gard also recalled that “there was concern” about his behavior on the part of the school administration, which emailed teachers relaying those fears.

Mr. Gard said that after the shooting, he learned from several students that Mr. Cruz was obsessed with a girl at the school to the point of “stalking her,” a point the authorities did not raise in news briefings near the scene.

The massacre called to mind the country’s two mass shootings that have come to be known by the name of the schools: Columbine, the high school outside Denver where 12 students and a teacher were killed in 1999; and Sandy Hook, the elementary school in Newtown, Conn., where 20 students and six adults were shot dead in 2012.

Lavinia Zapata embraced Jorge, her son, after the shooting. Credit Saul Martinez for The New York Times
More than 40 “active shooter” episodes in schools have been recorded in the United States since 2000, according to F.B.I. and news reports. Two 15-year-old students were killed and 18 more people were injured last month in a school in rural Benton, Ky. The shootings have become common enough that many schools, including Stoneman Douglas High, run annual drills in which students practice huddling in classrooms behind locked doors.

With the Parkland shooting, three of the 10 deadliest mass shootings in modern United States history have come in the last five months.

Mr. Nelson said the episode made him relive recent shootings that also shook the state. “Forty-nine slaughtered at the Pulse nightclub. Another handful slaughtered at the Fort Lauderdale airport, just a year ago, in the same county where this took place,” he said. “And that’s just Florida.”

After the gunfire had stopped Wednesday afternoon and Mr. Cruz had fled, students ran out of the school, some in single file with their hands on the shoulders of those in front of them and others in all-out sprints. As the students sought cover, law enforcement officers armed with military-grade weapons swarmed the building. Parents rushed to a local Marriott hotel to reunite with their children.

“I tried to stay calm. Students were running everywhere,” said Dianna Milleret, a 16-year-old sophomore who heard the gunshots.

Noelle Kaiser, 17, was in history class when a fire alarm went off. The class was gathered just outside the building when she heard three distinct gunshots.

“I am in shock,” she said softly after clutching her mother, Cheryl Kaiser, on the sidewalk outside the school.

“Words cannot express the sorrow that we feel,” said Robert W. Runcie, the Broward schools superintendent. “No parent should ever have to send their kid to school and have them not return.”

Parkland, an affluent suburb of Fort Lauderdale with a population of about 30,000, is known for its good public schools. Stoneman Douglas High is among the largest in the Broward school district, with about 3,000 students. The school will remain closed for the rest of the week. Gov. Rick Scott directed the state to lower its flags at half-staff until Monday.

“My prayers and condolences to the families of the victims of the terrible Florida shooting,” President Trump wrote on Twitter. “No child, teacher or anyone else should ever feel unsafe in an American school.”

As the authorities frantically searched for the person responsible, they asked residents of the city to avoid the area around the school.

For hours, parents were lined along Coral Springs Drive, calling their children on cellphones and pacing. Some parents said their children told them only to text to not make noise. One parent of two daughters at a nearby middle school said he sat in a bank lobby near the school and prayed.

The gunfire came as some students were still staring at chalkboards and listening to lectures.

Rebecca Bogart, 17, a senior, said her teacher was finishing up a discussion of the Holocaust when she heard a series of loud bangs.

“We all got on the floor and under the desk,” said Ms. Bogart, who was still shaking outside the school. “It felt like we were there 10 or 15 minutes and then shots came through the window and the glass shattered.”

She couldn’t see her classmates fall, but she could see at least five were bleeding, one in the head and one in the leg. “I was trying to keep calm and my friend was holding my hand to keep it from shaking,” she said.

When the authorities arrived, they took out her wounded classmates first. “There was blood all over the floor,” she said, “You never think something like this is going to happen to you and then it does.”