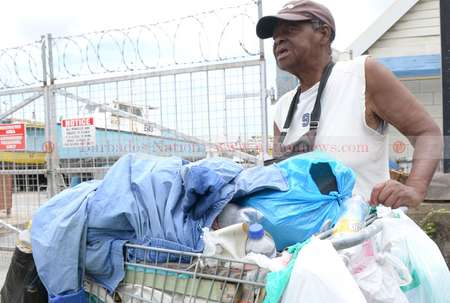 An elderly woman is the island’s latest murder victim.

The victim is 73-year-old Shirley Rogers of no fixed place of abode.

It is believed that Rogers, who frequented the Bridgetown Fisheries Complex, was asleep at the bus stop opposite the complex when she was killed sometime this morning.

Friends of the woman were still in shock when they spoke to NATION NEWS and some were in tears as they described Rogers as peaceful and very nice.

One of them, the founder of Fishers of Men charity Sharon Bellamy, called for the woman’s killer to be caught with haste.

Every day, for almost five years, Bellamy served Rogers and other vagrants breakfast and lunch.

“I spoke to Shirley upward to last night and she requested a fish cutter and porridge for breakfast. It wasn’t on the menu so because I had flying fish at home in the freezer I tapped back to the market to get some fish so I could give her what she wanted,” Bellamy, a vendor in the market said.

Still holding what was intended to be Rogers’ breakfast in her hand, Bellamy recounted that she knew the elderly woman from her youth.

“She came from the same village as me, up Pond side, and as a child she was always nice to me and would do all kinds of things for me and even take me to the sea that was why I would go out my way for this woman.

“From Sunday to Sunday I brought breakfast and lunch for her. I was so shocked when I got the news that she gone. . . . Why someone would do this to the woman I could never understand but I know them want catching,” Bellamy added.

Another vendor in the market who asked for anonymity said that they believed Rogers’ murder was a robbery gone bad.

“She was very nice, peaceful, loving. She gets money, and I understand that all the tourist give her money. She was robbed this past Monday. Last October/November she was also robbed and stabbed up Heroes Square and that is why she drifted down here. She was a real nice person, real, real quiet. Right now it is real depressing because everybody did like her,” the source said.

In September 2015, Rogers was featured in the NATION seeking assistance to find a home.

At that time, she noted that she was forced to live on the streets because the roof of her previous home had collapsed and the landlord decided to demolish the structure rather than repair it.