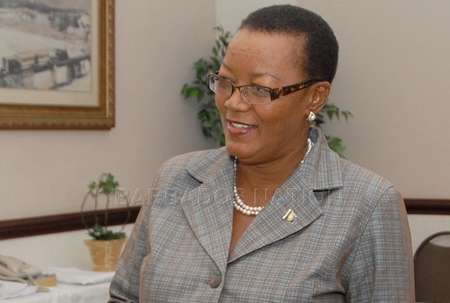 The incident was said to have occurred at the ATM at the bottom of University Hill around 3:30 p.m.

Senator McClean was reportedly approached by a gunman, robbed of her handbag and struck in the face.

Preliminary police investigations revealed that at around 3:30 p.m., Senator Maxine McClean, visited the ATM at University Drive, Black Rock, St Michael, when she was approached by a masked man, who stuck her at the side of her face with his hand, pulled her handbag from her grasp, and then fled the scene.

The police are appealing to anyone who can provide information that can assist with these investigations to contact the Black Rock Police Station at 417-7500, or 417-7505, Police Emergency number 211, Crime Stoppers at 1-800-TIPS (8477), or the nearest police station.

All information received will be strictly confidential.

The public is also being reminded:

∙ If possible, use ATM’s located in well-populated areas.

∙ As you approach or leave the ATM, scan the area for anyone or anything that may appear suspicious.

∙ Avoid using an ATM by yourself, take someone you trust with you, or only use an ATM when others are around.

More details as they come to hand.