Two men are expected to appear before a Siparia magistrate after a sting operation by South Western Division police led to the seizure of $6.2 million in compressed high-grade marijuana yesterday.

Up to late last evening, investigators led by Sgt Ramsaran, Sgt Richardson, Cpl Harripersad were questioning the suspects. It is believed the drugs had just entered the country through one of the illegal ports and was to be put on the streets in time for the Carnival season. 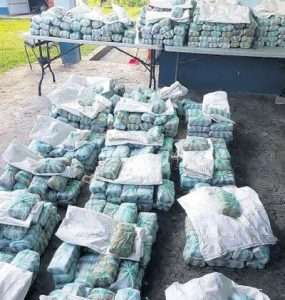 Around 7.30 am, the officers stopped a white Mazda panel van which was occupied by the two suspects. Constables Sookram, Durity, Ramkaran, O’Hamid and Ramsawack searched the van and allegedly found 26 crocus bags containing a total of 763 packets of kush weighing 461.04 kilos.

The suspects, a 36-year-old watchman of Partap Trace, South Oropouche, and a 36-year-old labourer of Reid Lane, Belmont, were taken back to the Santa Flora Police Station where they were questioned.

The men were expected to be charged last night.