A total lunar eclipse, a blue moon and a supermoon will happen simultaneously Wednesday.

None of these celestial events is rare in and of itself — but it is unusual for them to happen together, Shannon Schmoll, director of the Abrams Planetarium at Michigan State University, wrote in an article for The Conversation.

There was a blue moon total lunar eclipse on Dec. 30, 1982 — but it was not a supermoon, according to Krista Testin of the University of Nebraska at Omaha’s physics department.

“The last time a super blue moon eclipse occurred in the US was 152 years ago,” she said.

As a supermoon, the moon will appear 14 percent bigger and 30 percent brighter because it will be at its perigee, or closest point to Earth, Testin said. 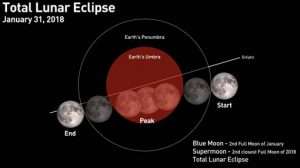 It will also be the second full moon this month, called a blue moon, referring to its rarity. However, the moon will look reddish-orange during the total lunar eclipse, Testin said.

“I’m calling it the purple eclipse because it combines the blue moon and a red eclipse,” Rich Talcott, a senior editor at Astronomy magazine, told The Independent.

Stargazers in the western US and Canada, across the Pacific Ocean, most of Australia and China, and northern polar regions can catch the celestial spectacular, paper reported.

New York City stargazers will be able to see the moon enter Earth’s penumbra — the lighter, outer part of its shadow — at 5:51 a.m. Wednesday, Space.com reported. While the penumbra will slightly darken the moon, it will be difficult to notice. The moon will touch the darker part of Earth’s shadow, the umbra, at 6:48 a.m. However, the moon will set 16 minutes later, so keen-eyed New Yorkers can only catch the first part of the eclipse.

Viewers in Hawaii, Alaska, eastern Asia and Australia will be the lucky ones — with the entire eclipse visible from beginning to end, according to the report.

Early risers in other locations can tune in to webcasts on NASA’s lunar Twitter account, Space.com and the website for the Griffith Observatory in Los Angeles. The Slooh online telescope will also broadcast the eclipse.

Those who miss Wednesday’s event will have to wait until Dec. 31, 2028, for the next blue moon total lunar eclipse, Testin said.