Police say a San Fernando man whose body was found in the backseat of a wagon that was submerged in the Usine Pond in Ste Madeleine may have been kidnapped and murdered.

Up to noon, homicide investigators were trying to confirm the victim’s identity. He was reported to be an Afro-Trinidadian man, who appeared to be in his late 20’s. 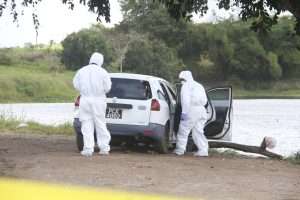 A report stated that a couple was fishing in the pond when they saw the hood of a car in the water and alerted the police.

Mon Repos fire officers and Ste Madeleine police were able to retrieve the car and the victim was found in the back seat.

A concrete brick was found near the accelerator pedal of the wagon.

Read more in the Tuesday’s edition of the Trinidad Guardian.