What should have been a weekend of rest for a Seivwright Gardens family quickly turned into horror, as an early morning blaze yesterday killed three infants and destroyed two dwellings in a yard on Booby Drive in the area popularly known as Cockburn Pen in St Andrew.

The three infants, two of whom were twin brothers, were identified as one-year-old Juvanni and Jivanni Bennett, also called Jeremiah and Joshua, respectively; and their two-year-old aunt Crisana Maxwell.

Crisana’s twin sister, along with another child who is said to be aged three, were also injured during the fire and up to press time remained in hospital. 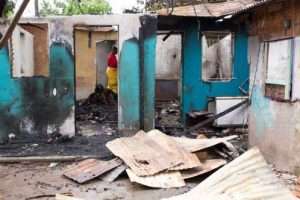 According to residents, 21-year-old D’Money Johnson rushed into the burning house, which was in the middle of the yard, to save the infants. He, however, was only able to save two.

“It never so easy. Mi did have to try hard though fi save that small one. I got to rush in when ‘Deke’ [one of the injured children] tell mi say help her brother in the house. And I go in and I try help. I could only save two. I couldn’t save the twins on the bed because it explode. The candle ketch on pon the gas pan… everything dun deh so. In there too hot,” Johnson stated.

When the Jamaica Observer went to the scene, firefighters were seen combing through the frame shell of the blackened and charred houses.

Senior deputy superintendent and public relations officer at the Jamaica Fire Brigade, Emelio Ebanks told the Sunday Observer that he was unable at that time to say what had caused the fire.

He explained, however, that the fire brigade got the call at 12:53 am.

“When we arrived we saw the place engulfed. We were told of the possibility of two persons [dead] so we started search-and-rescue operations. In cooling down we found what appeared to be a third body,” said Ebanks.

Abena Bailey, who occupied the dwelling to the front of the yard, said she came home yesterday morning only to see her home completely engulfed in flames and that she had lost everything.

“I was at Red Stripe,” Bailey said, adding that she heard that a burning candle near the stove was the cause of the fire.

The Sunday Observer was told that the children were left in the care of 18-year-old Sonya Clarke, whose room did not have electricity, so she decided to light a candle.

Clarke, who is the twin boys’ sister and mother of Crisana, had the children because her mother, Tisha Walters, 39, was at work.

“She [Tisha] didn’t get home until the place was totally engulfed and realised that she actually lost her kids. Her 18-year-old daughter was staying with them,” said Lambert Walters, a relative of the family.

He added that the family was awaiting the investigation before beginning to assume what could have started the fire.

“One thing we know is that the mother is very traumatised. That’s why the police decided to take her in — not for questioning or to hold her accountable — but for her safety,” Walters said.

“She lose a child before in childbirth [and] she was traumatised going through that, and now this come happen later on down the road, so you can just imagine,” Walters further expressed.

Meanwhile, Juliet Holness, who represented her husband, Prime Minister Andrew Holness, the Member of Parliament for the area, said that the Government had already started to mobilise resources to assist those affected, as Holness’s constituency secretary was organising temporary shelter for the other 10 people who were displaced.

“I am really sorry for your loss. I am happy that you have persons in the community who responded and rushed out to help even in the face of danger,” Holness said. “We would want them to continue to be mindful that every effort must be taken in any way that they can to continue to protect our children.”

The prime minister was absent as he was in St James touring sections of the crime-ridden parish which is under a state of public emergency.

However, Kingston Mayor Delroy Williams, who was also at the scene, described the situation as “an unfortunate” occurrence.

“We have started with the Kingston and St Andrew Municipal Corporation making arrangements in terms of their sleeping arrangements tonight with their family members, and the MP, through his assistant, has already donated some bedding for them,” the mayor said.

“I know the family members are both coordinating with us and the MP in order for them to sleep comfortably and have accommodation tonight [last night],” said Williams.

He added that he will be back today to see how best he can help the family move forward.

In a late development, the Jamaica Constabulary Force on its Twitter page last evening said that a woman was being questioned in relation to the fire. The tweet did not disclose the woman’s identity.