Prison officer Devendra Boodooram, 50, who was killed on Frederick Street, Port-of-Spain, yesterday felt so safe in his duties that he told his family on numerous occasions that should a riot break out he will be protected by the inmates.

Yesterday, around 5 pm, following death threats posted on social media after his colleagues were recorded kicking prisoners while the inmates were tied up, a gunman walked up to his vehicle and shot him at least four times in the head. 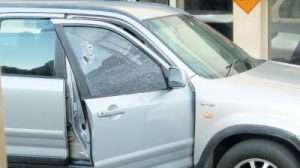 The killer, who was wearing a long sleeved grey jersey and short pants, ran up Frederick Street and across Oxford Street heading toward Chafford Courts. Police said the killer came out of a vehicle that was seen near the prison moments before the murder.

Following the killing, a 47-second voice note began circulating on Whatsapp warning prison officers to remain indoors and be vigilant as the criminal element said they were targeting four prison officers by the end of today.

Prisons Commissioner Gerard Wilson said his officers needed to be vigilant and the most that can be done was to put things in place and protect officers as much as possible. He added there was nothing that can be done about lawlessness.

“We will do what we can do, we cannot be with every officer all the time so common sense has to prevail and people need to be careful of what we are doing,” Wilson said adding that the killing is directly linked to the recorded incident days ago.

Seven inmates received medical treatment following the beating and Wilson appointed an Assistant Commissioner of Prisons to investigate the matter.

In a telephone interview with the T&T Guardian yesterday, Boodooram’s wife, Asha, said her husband spoke with her minutes before his death informing her that he was going to Ladies Night Out with some co-workers.

“I talk to him minutes before he leave work, he tell me he and them fellas going and make a cook and then he going Ladies Night Out. I tell him OK. So when I hear about it I said it couldn’t be him because I just spoke with him,” Boodooram.

By 7.15 pm when the T&T Guardian telephoned her, Boodooram said no official from police or prison had contacted her.

She added that her husband was the best any woman could have. The father of two girls, one a scholarship winner who currently attends Florida International University, worked as a prison officer for the past 24 years.

Boodooram said her husband at first tried out to be a police officer but failed and when he applied to be a prison officer he was successful.

She said the death threats made against prison officers was not taken seriously by him as he was not on duty when the prison search took place on Tuesday where the inmates were kicked and beaten and he worked in construction.

Boodooram said her husband worked at the Port- of- Spain Prison for the past three years and spent many years before at Carrera Island Prison. It was while working on the island that he boasted that the inmates would fight for him.

“He was a good worker. Even the inmates would say so. He got killed because of a job?!” Boodooram said in between her sniffles.

She said the family had planned to visit Caura River tomorrow but the unavailability of some family members had postponed the outing.

Boodooram is the third prison officer to be murdered in the past four months.

On October 8 Richard Sandy was shot dead in a bar in south Trinidad. On October 26, Glenford Gardner was killed at Sea Trace, Bagatelle, Diego Martin. Following those killing prison officers who had already applied for their Firearm Users License were told that they will be given priority by the Police Service, while the Prisons Officers Association (POA) and the Government negotiate other legislative issues aimed at protecting prison officers both on and off duty. The assurances given to the association during a marathon meeting with National Security Minister Edmund Dillon, Attorney General Faris Al-Rawi and then acting Prisons Commissioner William Alexander.

In an immediate response to the killing, Minister of National Security Edmund Dillon condemned it. Dillon noted that sacrifices are being made on a daily basis by law enforcement personnel who are putting their lives on the line to maintain law and order in the country. The minister also expressed his sincere condolences to the relatives, friends and colleagues of Boodooram.